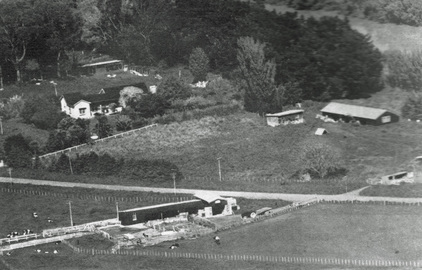 During the 1930’s a Friesian Stud was established by Henry & Theresia Alve with predigree cows and bulls purchased from  various places. The name “Westfalia” was given to this stud, recognising the origins of the family in the German province of the same name where Henry’s mother Maria had grown up and married Carl Alve. It is believed that after their marriage, if not before, Carl and Maria spent some time dairy farming in this region prior to embarking at the end of 1875 for New Zealand.

The information and data about the Westfalia Stud on this page has come from various sources and is between 55 and 80 years old. Correspondence with the N.Z. Friesian Association is in the possession of Terry Alve - Henry & Theresia's grandson - who lived on the Stud farm from 1956 to 1970 and milked many of the Stud cows from about 1959. Several 'Official Certificates of Transfer' remain as Westfalia bought cows and bulls from other Friesian Studs. Several of these certificates retain pictures of the individual animals. Entries in the N.Z. Friesian Herd Book volumes 29-51 from 1939 to 1962 were provided by the N.Z. Friesian Association upon request. This  info indicates that 37 cows born between 1938 and 1956 bore the Westfalia stud name as did six bulls. The Herd Book info includes dates of birth, registration numbers and the names of sire and dam.

​Data gathered has been entered into the Family Tree Maker 2014 to enable all cattle identified to be recorded including pedigree name, DOB, Herd Book number, sire, dam and relationship to the last registered Westfalia calf - Westfalia I.N.Colantha - the bull calf  born in July 1960. See below for Kinship report. This report indicates how dominant his bloodline was in the Westfalia herd.

​Terry has talked with family members about their recollections during 2016 and he has cast his mind back recollecting what he remembers of the animals and life on the farm.
​
The first two Westfalia pedigree cows recorded in the N.Z. Friesian Herd Book are:
N.Z. Friesian Association records indicate that a total of 37 pedigree Friesian cows were registered the last being:​
In addition six bulls were registered to the Westfalia stud.
The bull Westfalia I.N. Colantha (born 1960) was sold by Westfalia (then overseen by Val Alve - Henry and Theresia's son) to the Awahuri Artificial Breeding Centre for one hundred guineas. He was not up to the required fertility standards and was culled soon after.

​During the Westfalia Stud's 25 year active breeding regime several cows and bulls were purchased from other studs. Cows were purchased in the beginning from Glen Iris and Ellerlea Studs. Post WW2 from Okains, Maahunui, Sunny Park, Flaxbourne, Colestra, Moana and Royal Glen Studs. In 1951 six calves were purchased from Moana Stud. Bulls too were purchased to refresh the bloodlines before the advent of Artificial Breeding (A.B.) in the 1950's. Notably three Ruaview Stud bulls purchased from Ohakune resided at Rangitane from the late 1940's through the 1950's: Ruaview Prince Domino, Ruaview Ideal Masterpiece and Ruaview Ranger. In particular, Ruaview Ideal Masterpiece served many of the Westfalia cows during the 1950's, and caused problems with his very aggressive nature requiring strengthened fences to keep him contained. Terry Alve has boyhood memories of his dad (Val Alve) chasing this bull variously with pitchfork and 22 rifle in an effort to tame and contain him.

Norma - Westfalia Ideal Colantha (#81686) - was older sister of Westfalia M.E. Colantha, mentioned above as the top Westfalia producer. Norma might well have been in the same league as her younger sister, except for the fact that she was like her father Ruaview Ideal Masterpiece - the aggressive bull - she too liked to jump fences. The barbed wire fence she tried to jump near the native bush at the top of the farm deprived her of one of her teats.

​Clover - Westfalia M.E. Jewel - was a contradiction. Quite a black cow she was rebellious. She was almost always in the last bail if cows (8 per bailing) and she had always to be leg roped, sometimes with difficulty as she was not averse to kicking out. Sometimes when leg roped she would kick until the top of her leg was raw, if the mood took her. Yet, when she was in season - ready for mating - she would come forward early during milking and smooch with dad as if he were the bull - her temperament  changed markedly at this time even allowing her to be bailed first.

​The 1956-57 season was the last year Henry & Theresia lived in the Westfalia homestead adjacent the cowshed. Val and his family had moved in during the winter of 1956 and the two couples with Val's wife Joyce and 3 children shared the homestead, until Henry and Theresia moved to Bainesse in 1957. Henry has left a record of the calves born to the pedigree cows during 1956 - a total of sixteen - progeny of 10 Westfalia pedigree cows and 6 of the other purchased pedigree cows. During this 1956 season the other studs represented at calving were: Moana (3), Flaxbourne, Sunny Park and Okains. Nine heifer and 7 bull calves were born in 1956. Only one of the heifers - Westfalia Ideal Glory (#91810) - was registered with the N.Z.F.A. by Westfalia.
During the 1957 calving season​ one of the Westfalia heifers born was passed on to Ivan Alve who established the Wisteria Stud as a sharemilker.  A Westfalia sire and dam produced Wisteria Treasured Piece (#91811) - Sire: Westfalia M.E. Illustrious (#27523) and Dam: Westfalia Ranger Coin (#85032).

​After the registration and sale of the bull calf, Westfalia I.N. Colantha in 1960/61 to the Awahuri Breeding Centre, there were no further Westfalia pedigree registrations. The remaining pedigree cows continued in the herd until their death and/or sale when the Rangitane Westfalia farm was sold May 1970. Throughout the late 1950's and through the 1960's artifical breeding took over. The 2 year old heifers were crossed with a Jersey bull and late calvers were served by the remaining Friesian bull.

​The Westfalia Stud is commemorated by a stained glass window at the new home of Terry & Margaret Alve, 4A South Street, Tawa, Wellington. This was created in 2016. This window depicts a painting of Royal Glen Regina Gypsy (Bluebell) copied from her certificate of transfer by Pukerua Glass artist Olaf Wehr-Candler. The 'Westfalia' text is capitalised Times Roman beneath the oval painting of Bluebell. The horizontal red and white colours of the Westfalia, German province of the 1870's undergird the imagery.
​