The “Times” on the 25th March 1876 reported that it was from aboard the “Manawatu” that Carl and Maria, with Mary, finally stepped on to New Zealand soil,
"The P.S. Manawatu, Captain Harvey, left Wanganui at 8.45p.m. of the 23rd, crossed the bar at 9.30, and arrived alongside the wharf at 10.20a.m. yesterday. Experienced fresh N.W. winds to arrival. Had a very heavy sea in crossing the bar. Passed a barque and schooner beating through the Strait. After landing passengers and discharging cargo, she proceeded to the German ship Gutenburg, and brought all the immigrants with luggage to the wharf...."

The immigration commissioners reported upon the ship’s arrival,
"On inspecting the immigrants we found that generally they were a healthy and robust body of people with the exception of the Italians many of whom were undersized and in our opinion unfitted for the laborious work required of immigrants introduced to this Colony."

After a voyage lasting 99 days aboard the “Gutenberg” Carl, Maria and Mary spent an unknown period of time in Wellington, presumably in immigration barracks, before they made their way over the Rimutakas by bullock wagon to Featherston.

"It is a coincidence that my mother’s parents lived in Eketahuna at the same time as your great grandparents. As a little girl, my mother was sent to get eggs from the Alve’s. Your great grandmother kept geese and my mother was terrified of the big gander which would hiss at her. Your great grannie would shoo it away in German. The Alve's and the Haycock's (mum) both shifted to the Manawatu (in 1902) and lost touch!"

“A Goodly Heritage”, Irene Adcock’s history of Eketahuna and Districts gives us some insight into the religious history of Eketahuna. The Alve’s were Catholics and would have been involved in the beginnings of organised religion in Eketahuna. Adcock (p.104) comments,
"In the early nineties, by which time a fair sprinkling of British stock had joined the Scandanavians - and the half dozen German families in Alfredton Road - clergymen from several denominations were visiting the Eketahuna area to administer to the need of their parishioners.... According to some reports the first services of the Roman Catholic Church were held in the Eketahuna schoolhouse. Father Vincent McGlone in his history of the Catholic Church in the Wairarapa district records that, "At Eketahuna Mass was said in the beginning at Mr Kelliher’s Club Hotel. He was an Irishman and always welcomed the priest’; the priest at the time being Father John McKenna of Masterton. With his brother, Father Thomas McKenna, the curate of Masterton, this priest devoted much of his time to the Bush district."

Anecdotes have been passed on about Carl Alve’s uneasy relationship with the Catholic Church and its Priests. One suggests that he was at one time castigated from the pulpit for giving only 10 shillings to the Church, which was less than generous. On another occasion it is suggested that the Priest asked for, and took, a cooked leg of mutton when there was no money for his collection. Maria is reported as commenting on how different the Church in New Zealand was from what she had experienced in Germany. In the Wairarapa during their years there, the cost of extending the Church into new communities was no doubt considerable and consequent appeals to the faithful would have seemed heavy. Compared with Germany where it had been long and well established, the pioneer Church in New Zealand inevitably would have appeared and felt very different. Notwithstanding these tensions, the services of the Catholic Church and its Priests were called on by the family, at least until Carl’s death in 1910, when he was buried in the Catholic section of the Palmerston North Cemetery.

Alfredton School Class about 1896
Back Row L-R: Henry Alve (4th) and Alred Alve (6th)
This is possibly the oldest photo of any of the family still in existence.

The move from Eketahuna back to the Featherston area was made in difficult circumstances. As noted above, the Alfredton Road land was hardly an economic unit, especially to support a large family. Although it seems the land was paid for early in the 1890’s, prices for dairy produce at this time were not good, and a number of North Wairarapa settlers were selling out. Some went full time bush-felling. Others, notably a number from Mauriceville, moved south to share-milk for the Donald’s of Featherston, who had much good land. Carl joined this latter group during the winter of 1896, shortly after Emma was born prematurely and died.Sadly, shortly after the family moved to Donald's Rosa died, having been ill with diphtheria for six days. Her grave remains in the Catholic section of the cemetery near Featherston with the inscription,

There was a stone cross on top of the tombstone that was broken off and lying on the ground in January 1991 when the author sighted it with Tis Emmens.

James Donald (1829-1899) who employed Carl sharemilking, had his own butter factory named “Tarureka”, which was established in 1882. Bagnall’s "Wairarapa: an Historical Excursion" notes,

By 1889 there were a total of four “dairies” each milking 125 cows, mostly Red Danes, supplying it. Each dairy had its own brake capable of carrying forty cans of milk to the factory. The dairies were all run by sharemilkers who were responsible for the feeding out of hay, milking of the cows and delivering the milk to the factory. Here the milk was weighed and a tally kept in order to pay the sharemilkers their agreed share on the 15th of every month. Tarureka was equipped at first with a 90 gallon capacity separator, but by 1901 two 400 gallon separators were processing the milk from the 600 cows. Five hands were employed in the factory while on the farms some fifty persons were employed in all.

Another burden that faced the family after their move back to Featherston was Theresia’s encounter with hydatids. About 1896 she spent several months in Wellington hospital following surgery to her lungs and liver. For quite a time she was in a life -threatening situation and to her doctors’ amazement she pulled through, although requiring a return to hospital later to deal with infection. Despite this health problem which affected her for many years after, she pitched in with the milking at South Featherston along with her brothers and sisters.

The second to last of Carl’s and Maria’s children, Clara, was born during July 1897, a year after their move back to Featherston.

At the end of the following year, at the Alve residence Featherston, “Annie Mary Alve” married George William Henry Busch on the 27th December 1898. The photograph below is thought to show all family members who were living at the time of the wedding. 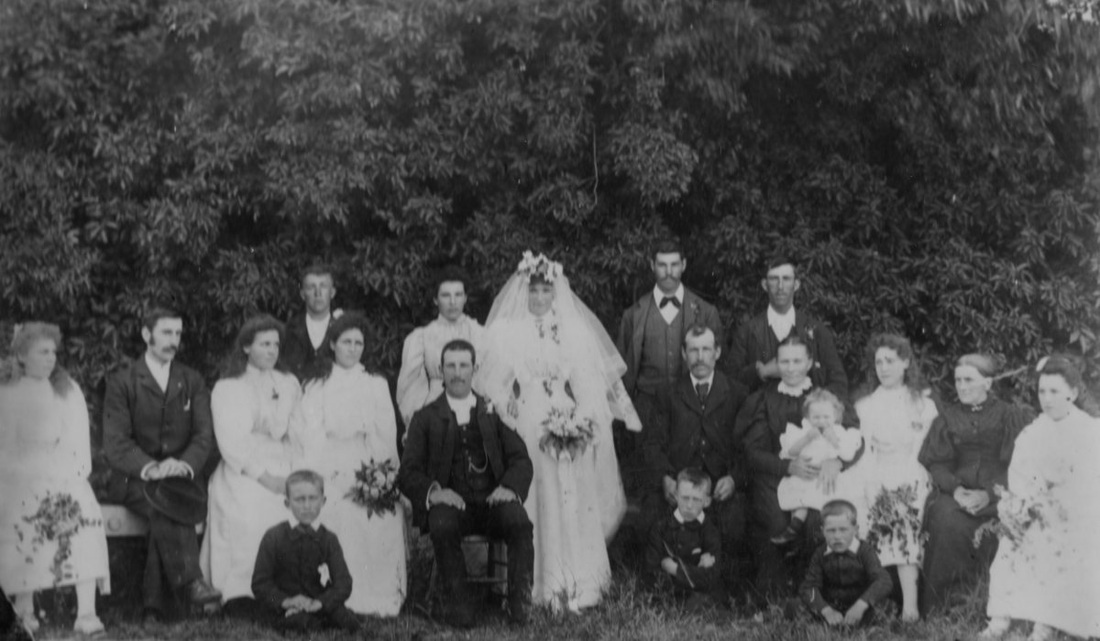 Just before Carl & Maria left to live in the Manawatu with most of their family, Mary and George presented them with the first of their thirty six grandchildren - William John Busch. He was born in Featherston on 23rd July 1900.

With the turn of the century and their move to Rangitane, Manawatu Carl and Maria had been in New Zealand - Wairarapa settlers - for 24 years. Their family had grown from the one child, Mary, with whom they had arrived in New Zealand to eleven children plus two deceased, and one grandchild. In financial terms they had made modest headway, enough to pay a deposit on another area of virgin, bush-clad land on the other side of the Tararua Ranges. Life had been very difficult, especially during the sixteen years in Alfredton Road near Eketahuna. If the burden of debt and little income pervaded their years in the Wairarapa; the problem of flooding in the Manawatu would now come to dominate their lives. Probably without them knowing it, the Manawatu River on whose banks Carl and Maria and family would settle had its headwaters in the Mangaone River. This river had drained the land across the ranges where they had first farmed near Eketahuna!

This next chapter of their lives in New Zealand would begin as their Eketahuna one had; clearing land of its primeval bush covering.