Carl moved with some of the children to create a new farm out of the bush at Rangitane in 1900, before the rest joined them later.

Arrival at Rangitane until Carl's Death in 1910

While Carl & Maria with Eddie & Clara moved late in 1900 to Rangitane in the Manawatu to occupy newly purchased land, the rest of the family stayed behind at Featherston working at Donalds’ sharemilking to help pay off the farm or, in the case of the younger children, to continue their schooling.

The farm was adjacent Ngawhakaraua maori village. The Ngawhakaraua bend in the river where the Alve’s settled was an important centre for early travellers to Palmerston North in the period 1840-1873. The river was safely navigable from Foxton to this point. History records that in 1840 Jack Duff, a trader, left his whaleboat here and continued upstream by canoe. Charles Kettle, the early surveyor, camped near here in 1842 during his journey up river. In 1866 a jetty was built here to connect with the end of the last straight stretch of the road from Palmerston North to Ngawhakaraua. In the early 1870's the small steam launch, "Pioneer" unloaded many of the stores and people destined for the fledgling settlement that became known as Palmerston North.

The site where the Alve family built their initial shelter, a slab whare, which progressively became a six bedroom homestead, was a little upstream from the Ngawhakaraua jetty.  By 1870 there was a dry weather track connecting Foxton with Palmerston North and in 1871 a wooden railed tramway with carriages drawn by horses was being constructed from the new settlement of Palmerston as far as Ngawhakaraua. This was extended and finally reached Foxton in 1873. Subsequently the jetty was little used and fell into disrepair. By 1876 the the line was completely ballasted; iron had replaced the wooden rails and steam engines replaced the horses. The Rangitane station on this line was a stones' throw northwest from the Ngawhakaraua jetty and the Alve house, and was close to the boundary of the initial Alve farm. 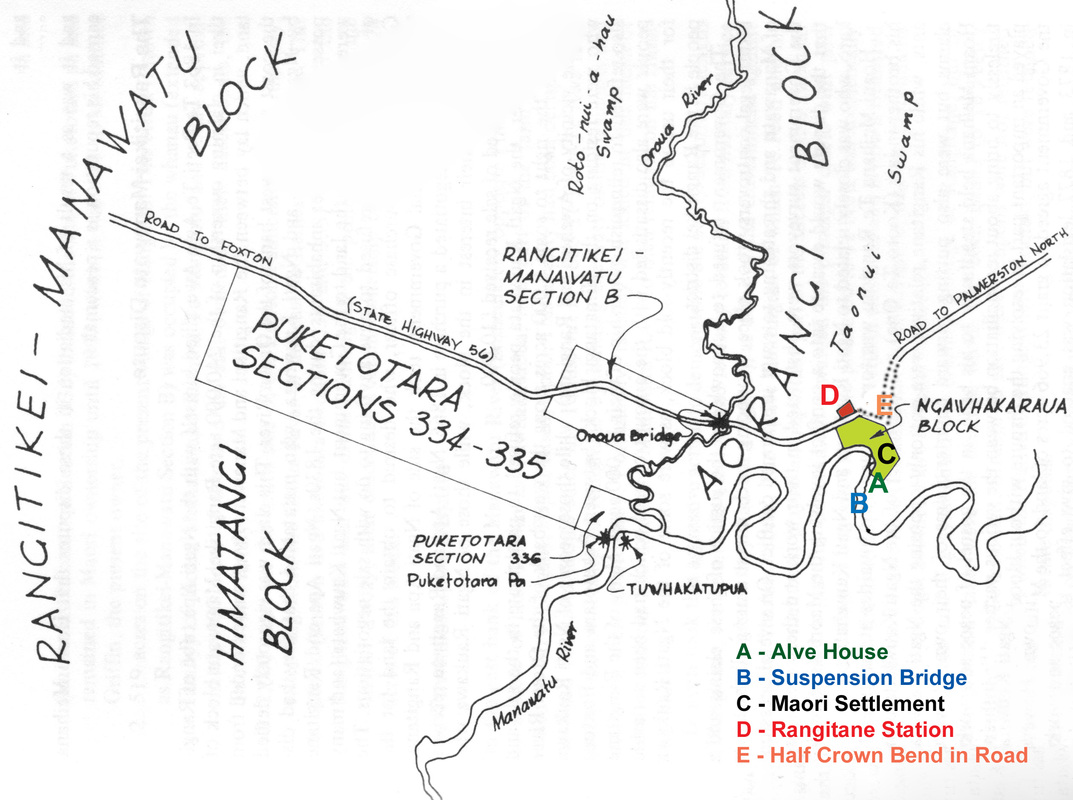 A Maori settlement at Ngawhakaraua was occupied by a number of the Rangitane people. They had moved upstream from the Puketotara Pa to Oroua Bridge (built 1867) and on to Ngawhakaraua where the principal buildings were a meeting house and a very fine church. This settlement adjacent the Alve farm was occupied when the family arrived in 1900 and continued into the 1920's when its residents moved  to the Rangiotu settlement adjacent the Oroua R. and bridge where the "Te Rangimarie" meeting house on the marae is cherished by the Te Awe Awe family.

Eddie Alve reported that there were in the vicinity of 200-300 maoris living in the village when the family arrived, There were two meeting houses, and a real elaborate church where the organist was occasionally Miss Simpson and where white people would attend. Chief of the Rangitane people in the 1900's, Mr Wiremu Te Awe Awe (Billy Larkins) noted that,

I can recall old settlers there who were very closely associated with the maoris in the persons of the old Mr & Mrs Alve and their family.... As far as I know they were good neighbours, very neighbourly, they got on very well together.

Late in 1900 the Carl Alve family arrived here from Featherston and bought a 111 acre block from Bruce Beale of Palmerston North. Living for a while in a slab whare, they began clearing the bush and growing potatoes. They gradually built up a dairy herd to 104 cows, all hand milked  by up to six milkers until machines were introduced in the 1929/30 season.

In a taped interview Merv Eglinton recorded during the 1960’s, Eddie Alve commented about the journey to and conditions at Rangitane,

We came up by train. We had a change at Palmerston and got on to the Foxton branch and got off at Rangitane. In those days there was no road here, we had to go through the maori pa. There was quite a big maori pa here at the time and for about twelve months the only place we had to live in was a slab whare. The mosquitos were terrible. It was just one constant buzz all night long and you had a terrible job to get any sleep at all....To go to school the only way was to go along the railway line - the road was just a mud pool, a mud track through the middle of the bush.

According to Henry Alve in the same interview,

The original block of 111 acres which was standing bush was bought from the late Mr Bruce Beale a solicitor and barrister of Palmerston North in the spring of 1900. The price was seven pound ten shillings per acre....The family began farming on the original block in November 1902 with a herd of 30 Jersey-Shorthorn heifers....and about six other heifers....and the cow that Mrs Alve had milked earlier....The first milking shed was a four bail lean-to building....This shed did for about four years when Mr Ernie Nash was engaged to build another 12 bail shed with loft and hay barn adjoining.

Henry further reported that this enlarged shed was used in time to milk up to 104 cows by hand - six milkers were used, including Lena and Elizabeth. Charlie and Henry moved to Rangitane during 1902, but there is no documented record of when exactly Alfred and the older girls came, if they didn’t come with Charlie and Henry. The following is extracted from “A History of Rangiotu”, factual ammendments in [],

In [April 1902] after the exams were over, Henry joined his parents. One acre of potatoes were planted at the top end of the farm near the river. Most of these were sold to help the family income.... The Simpson family were their neighbours, and during the 1902 [June 14th] ‘old man’ flood, provisions ran low, so Charlie Alve and Bob Simpson went by canoe to Oroua Bridge to get supplies. Luckily for the family, they had no stock except for one cow on the farm. The children sailed about in half a barrel.

The farm was near the “Half Crown Bend” in the Palmerston-Himitangi road; nowadays the junction of Alve Road with S.H.56. There are various theories about the origin of this name each of which, whether true or not, throws some light on the history of the area. Buick in his “Old Manawatu” (1903) comments in a footnote,

The precise origin of this term, which is now applied to a bend in the road near the Oroua Bridge, is involved in some doubt, many people believing that it is simply a short and easy way of pronouncing the native name Ngawhakarau, just as “Jackeytown” has been substituted for Tiakitahuna. I am, however, informed on very good authority, that it arose when the road was being made, from the fact that a black cook, who ran a sort of eating house for the men employed on the work, charged half a crown for every meal.

Other explanations for the name mentioned by Molly Akers in her history of Opiki,”From Fibre to Food” are:

1. That the land in the vicinity of the present junction of Alve and Opiki Roads was believed to have been sold for half a crown an acre (before the Alve’s arrived) - a low value because of continual flooding.
2. Half a crown was the return fare charged charabanc (bus) travellers from here to Palmerston North.

A Birth, a Two Weddings, a Funeral and Floods

In August 1908 Theresia married Herbert Simmons in All Saints, Anglican Church, Palmerston North. Theresia and Bert went to live at Mangawhata on land his father (a butcher) had bought in 1902 for the two brothers - Bert and Charlie. One of Bert’s claims to fame was that he was responsible for issuing a challenge from the Huia Rugby Club (based on Rangiotu) to the newly formed Manawatu representative team. The Huia team was captained by Billy Larkins and had some notable players at the time. The game, played in Palmerston North, was won by Huia 8-6!

Another visitor to the Alve household before 1910 was Bill Busch - oldest child of Mary. After her marriage, Mary had continued to live in the Wairarapa after the family moved to Rangitane. Bill did some of his schooling at Rangiotu, while staying with his grandparents. He finished standard six there in 1914 and returned home. Bill writes that he,

.... was there when Anna (1906) and Carl (1910) died .... My mother, always known as Mary, never told us much of their early life .... I well remember the old people Carl and Theresia Alve. Carl was a typical German and had very little respect for women and bossed all the family, but did nothing himself.

It might be noted that Carl had chronic myocarditis (heart trouble) from about 1905 onwards and would have been physically very limited. This may also have accounted for his violent temperament observed by his grandchildren. 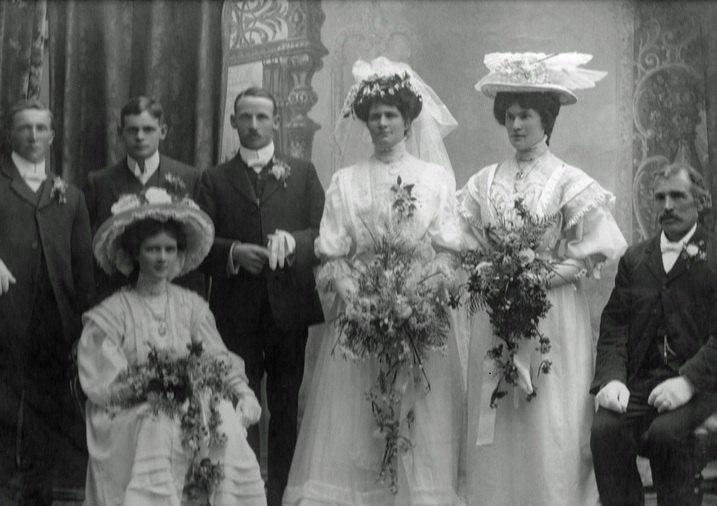 Wedding between Bert Simmons and Theresia Alve 1908
L-R: Charlie Alve, William Simmons, Letty Simmons - later Goss (seated), Bert & Theresia, Elizabeth Alve and Carl Alve (seated)
Colin Alve reports that his father observed Carl was a short, stocky man with a very quick temper. Colin retells the story of him fencing with Henry one day. When he told Henry to do something, Henry was heard to mutter under his breath before he was hit in the backside with Carl’s thrown hammer. On the contrary, Maria was very placid. She would often have to lay awake at night listening to her husband’s “ravings”. Lena is said to have preserved her mother’s temperament. Carl mentioned little about his relations or Germany.

Carl died in Palmerston North hospital on the 21st September 1910. He died as a result of a ruptured aneurism of the left ventricle, i.e. heart attack. His funeral was held in the Palmerston North Catholic Church and he was buried in the Catholic section of the Palmerston North cemetery, adjacent Anna, on 24th September. He was survived by his wife Maria Theresia; five daughters - Mary, Theresia, Lena, Beth and Clara; and five sons - Charlie, Alfred, Henry, Eddie and Dolf. At the time of his death, as noted, Mary, Theresia and Lena had married. There were at that time eight grandchildren - Mary had Bill, Fred, Jack, Tis and Rose; Theresia had Harold; and Lena had Gwen and Daphne.

Carl’s passing marked the end of an era. He, with Maria, had emigrated newlywed from northern Europe to the antipodes in most trying circumstances. His life was a testimony of courage, adventure, determination and, as the above story tells; exceedingly hard work. All who are their descendants can look back and with proud gratitude recall that they have as forbears people who contributed significantly to the early development of their young nation - New Zealand.

The Manawatu Evening Standard” printed the following obituary to Carl Alve in its edition of 23 September, 1910,