THE ALVE FAMILY IN NZ

Maria and the Family

Carl & Maria and their children were of German descent. As far as the author is aware none of the Alve boys: Charlie, Alfred, Henry nor Eddie were called up for war service. Dolf was too young to be considered. Some of the sons/brother in laws were. Peter Pedersen (Elizabeth's husband) was called up and passed fit for service but the war ended soon after.Clara's husband to be Lionel Purdom served overseas as did Charlie Simmons, Thelma's bachelor brother-in-law.

In 1915 Henry's wife to be Theresa Wagner (of German descent) arrived in NZ from Tasmania to visit her mother's brother (uncle) William Hauke in Dunedin. In the North Island she had some connection with the Brownlie family (of All Black fame) in Hastings and the Parkers in the Manawatu who had a Tasmanian connection. At some point during this OE Theresa was grounded as an 'alien' when anti-German sentiment arose. By March 1917 she had met and married Henry Alve and became a Kiwi. Henry had begun farming on his own account the year before. 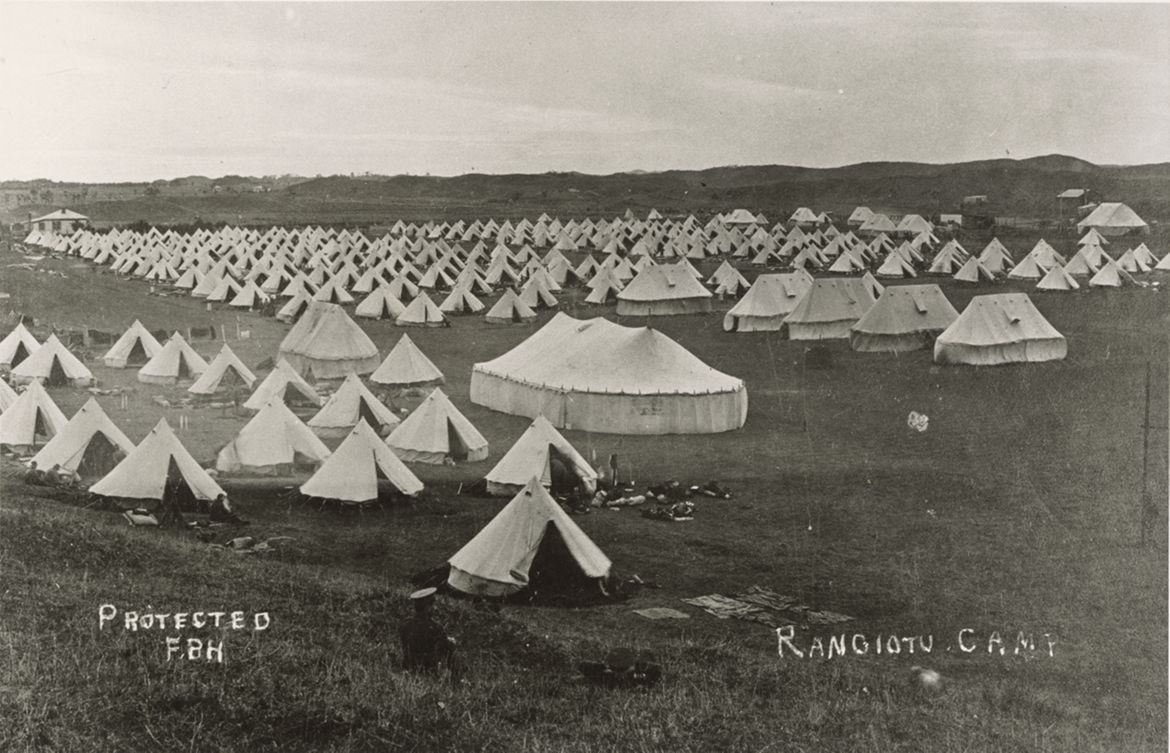 Rangiotu Army Camp
During World War One Manawaroa Te Awe Awe offered the Government the use of part of his farm for a training camp, to replace the camp at Trentham (Wellington) which had been evacuated. Samuel Jickell, Palmerston North Borough Council Civil Engineer, prepared a comprehensive report on the drainage, sanitation and water supply of Trentham Military Camp, and when he laid out the Rangiotu camp near Palmerston North in 1915 he made sure that the poor conditions at Trentham were not repeated. During 1915 men from the 1st & 2nd New Zealand Rifle Brigade and the Earl of Liverpool’s Own Regiment used the land. Initially the camp was situated where the Rangiotu School was but later it moved 1 mile west, opposite Pyke’s Road. The entire camp was moved by hand and occupied approx. 3000 acres and could accommodate 2,000 men. To avoid cutting up the ground, no wheeled vehicles were allowed in the camp.

Charlie led the Brothers from the Top of the Farm

Life on the farm continued, initially under the direction of Charlie, the oldest of the boys. He and Dolly moved to live in the house at the top of the farm in 1911 after their marriage. He worked the farm, which had been bequeathed to Maria, with Henry and Eddie. Alf worked away for a while, before he was assisted on to land at Bainesse. Dolf continued at school before working with Alf. In about 1921 the land was vested in “Alve Brothers” before transferring to individual ownership in about 1935, after a Public Road had been declared through the land. It seems that the lawyers did profitable business with the Alve’s during these years and subsequently, as land was passed on to other members of the family.

Alex Wallace (Charlie Alve’s brother-in-law) used to visit the Alve’s during his school holidays around 1910-15. He travelled by train from Eketahuna to Palmerston North and by “dog cart” along metal roads to the farm at Rangitane. He reports breakfast with the family consisted of porridge, home-made bread, boiled eggs from the farm fowls (4-5 for the men often), and meat. The family sat either side of a long, white-painted, wooden table. Maria did the cooking over a very large range. Sometimes she gave the family fried eggs, but this involved much more work. The staple diet consisted of potatoes and meat.

Each of the boys had his particular job on the farm, Alex reported. Charlie was the slaughterman - there were pigs at the time. Eddie was the bee keeper. Charlie would pay Alec to cut thistles with a slasher and this was the means of buying a music stand for his cornet music. Until they got their share of the land, Charlie and Catherine milked the cows with all the others. Memories of Henry were how he would drop off to sleep so easily upon sitting down. The boys would play cards for entertainment in the evenings, but very often Henry would fall asleep during the game. 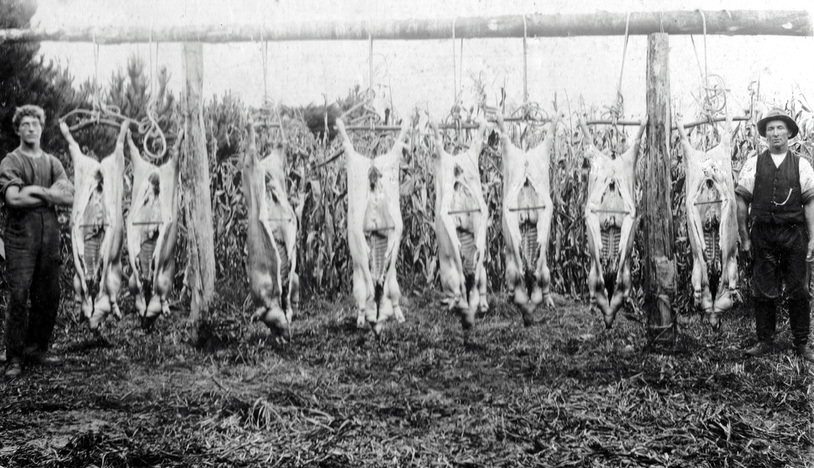 A Co-operative Venture and Innovation

Until the flax mills closed in 1921, the farm supplied them with milk and meat. Milk was also supplied to the emerging dairy factories, Charlie and Henry becoming directors for a time of the Manawatu Reliance Dairy Factory at Rangiotu, which they supplied. Milking machines began appearing in the late 1920’s, a Moffat-Virtue model from Masterton being installed in Henry’s shed in 1929. A feature of farming during this period was the co-operative nature of the community. Amongst the brothers, but also including their neighbours, especially at haymaking time. They would move from farm to farm when the need arose. 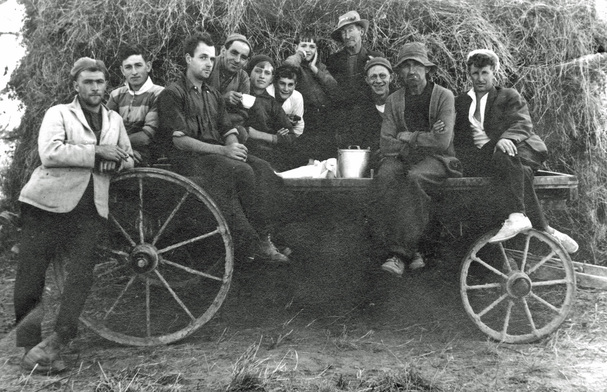 Haymaking c.1935 was all about teamwork - family and neighbours pitching in.
L-R:Jack Weir, Lewis Henderson, John Muirson, Ernie Henderson, Val Alve, Hilton Alve, Harry Alve, Charlie Alve, Henry Alve and Peter Fawcett.
After Charlie’s death in 1937 from a strangulated hernia, Henry farmed his block while Dolly lived on in the house. About this time Henry also established a Friesian Stud he called “Westfalia”, which was named after the German region his parents came from. In the late 1930’s. Eddie moved away from his land, and brother Alf farmed his block for about five years until Eddie returned.

This picture of the May 1941 Manawatu River flood captures graphically the big impact and the extent of the inundation of the Alve land during the bigger Manawatu River floods. The farms were in the Manawatu's lower Taonui Basin which was a low lying ponding area when the river flooded, draining via Burke's and Main Drains back into the River downstream as the flood level subsided.
Key: 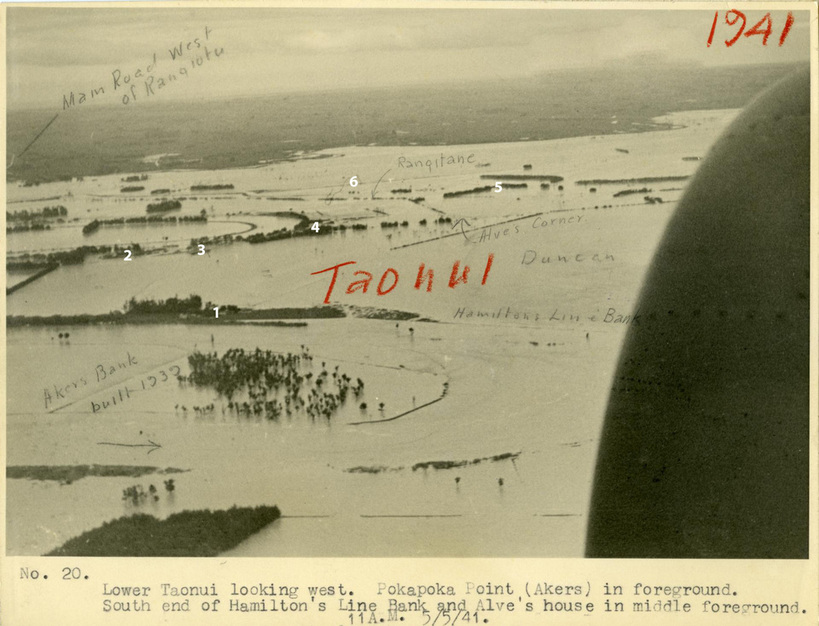 End of an Era - Maria's Death

This period ends with the death of Maria Theresia at Clara’s home in Stanley Avenue, P.N. at 3p.m. on 30th April, 1942. A newspaper obituary a few days later reflected on her life.